Gehl has just completed a study of how the Corona crisis and the current lockdown of Denmark affect how we use the city and its public spaces. The study, supported by Realdania and Copenhagen Municipality, is based on data from the Danish cities Copenhagen, Horsens, Helsingør and Svendborg. It shows that local meeting places are more important than ever before.

In Denmark, big parts of the society have during the last 1,5 months been under lockdown, to limit the spreading of COVID-19, and most people are staying home. When we finally go outside, it is most often to do the daily grocery shopping, go for a walk or exercise.

When everyday life for most in Copenhagen is changing, the way we move around and spend time in the city also changes. But how? This is what a group of experts from Gehl – with support from Realdania and Copenhagen Municipality – has looked into, using collected data from Copenhagen, Horsens, Helsingør and Svendborg.

Liselott Stenfeldt, director at Gehl, says: “The goal is for the analysis to become a sort of ‘baseline’, that can help us better understand some of the fundamental elements and principles for socializing, and how it affects our mental and physical health – now, when the activity in the city is down to a minimal.”

Gehl has compared data from before and after the outbreak of COVID-19. The different historical data sets are all from within the last 10 years and har been collected using the same methods as in the current survey. The comparison has been made both within each city, to give insights into how public life has changed during COVID-19, as well as between the different cities, to identify both unique and overarching patterns.

What the experts more concretely have done is to collect data by observing where, how and who (looking at age and gender) has been spending time in different public spaces around the city and how how people has used the streets, on weekdays as well as weekends. Special focus has been put on how use and character has changed for example on streets, now that most shops are closed.

It has also been interesting to look at how green spaces and nature is used differently – and in some cases way more – than before the COVID-19 outbreak.

The survey clearly shows how local meeting places in Copenhagen are now even more important than before - in some public spaces with as much as 2-2,5 times more staying activity. In the same places, the number of pedestrians and bicyclists has at the same time gone down with 25-50%.

Other than that, the experts have also been focusing on identifying new nodes, emerged when companies, kindergartens and schools has been closed. Gehl are currently working on using insights from the survey to learn more about where potential new bottlenecks might occur, in a time when we should stay away from large gatherings, and how cities can prepare for them.

Jeff Risom, Chief Innovation officer at GEHL, says: ”The way Danes and Danish cities are handling the Corona crisis is very much built on trust and shared responsibility. This is unique world wide, and should be widely spread. Compared to many other countries, that has closed public spaces or limited outdoor life, public spaces and public life, part of Denmark’s strategy has instead been to let people take care of each other and at the same time enjoy physical activity, fresh air and socializing at a distance.”

Nina Kovsted Helk, CPO at Realdania, says: “There is at the moment many who are wondering how COVID-19 will influence our society and the way we socialize, now and in the future. How we use outdoor areas both in the city and in nature, has gained a new importance. Gehl’s survey and analysis is a unique study in a unique period, where new terms for how we can move around in the city will emerge. It will be exciting to see the results. Maybe we gain knowledge, that we can use in future cities and public spaces.”

Sisse Marie Welling, Health and Care Mayor at Copenhagen Municipality, says: “The Corona crisis has pointed out, that cities like Copenagen need more and bigger green areas. It has also become clear, where the population density is highest. It has, for example, been more difficult to keep distance in Nørrebro than in Østerbro. And the need for it will not be less important in the time to come. That is why this survey is good to have”, she says and adds: “In Copenhagen our focus is on having public spaces that invite people to play, stay and socialize, and we want a lot of places of respiration and urban nature. This is reflected, among other places, in our Municipal Plan. It is therefore interesting to become smarter about how different Copenhagener groups use the city. By doing that, we can secure that as many as possible get to enjoy the outdoor life of the city.”

Other results from the survey show that:

Results and data from the survey put together in interactive dashboards are already accessible for the public. This data about how the city is used at eye-level can be combined with bigger datasets (“big data”) for example from Google, to get a more nuanced understanding of the democratic society we live in. 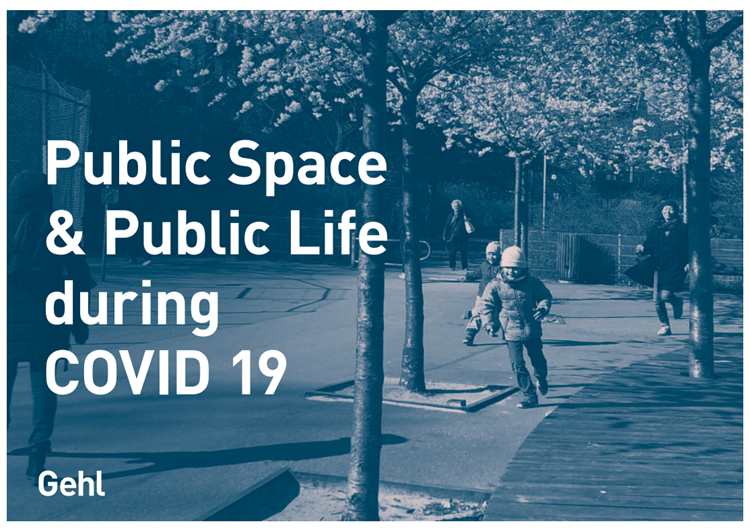 What can be said about COVID-19 that hasn't been said already? Rather than simply talking and writing about the pandemic this publication shares the lived experience of it.

Go to the publication